Honey and the Bustling Beehive

For the first three decades of my life, honey was this sweet syrup that one buys off supermarket shelves and uses in herbal teas or the home remedy mix of honey, ginger, and pepper that one has in cases of throat irritation.

And then I had a conversation with an entrepreneur who has an organic honey startup, and I realized I was wrong.

Honey is a way of life.

Honey is not a sweet syrup. Honey is a paigaam (message). A postcard sent you by these various characters giving you a glimpse into their lives.

The Chemical Composition of Honey

These components give honey a plethora of medicinal values. The fructose makes it a healthier sweetener than sugar. The flavonoids give it antioxidant power, empowering the body against heart problems as well as cancer. Of course, the benefits of vitamins and minerals present in honey are not very high, but still, make it a comparatively healthier sweetener.

Those of you who usually buy standardized honey from big brands probably won’t know, but the thickness, color, and flavor of pure raw honey vary depending on the conditions it was collected in. These factors also affect the nutrition level of the honey. In fact, the United States Department of Agriculture (USDA) classifies honey into seven categories of color: water white, extra white, white, extra light amber, light amber, amber, and dark amber. Typically, the darker a honey is, the healthier it is. This is because dark honey typically contains more minerals, vitamins, and antioxidants.

The Beehive: Magic of Alchemy and Mathematics

A lot of times I enter into the argument about what is considered intelligent in this world? Biologically, the ability to perpetuate and keep one’s species going is considered to be intelligent. And in saying that, bees are highly intelligent. Their entire existence is devoted to this one single aim in life.

Accordingly, the bee family has three main members. The queen, the drones, and the worker bees. And all of them work to survive.

Out of the 20000 to 80000 bees living in a beehive, there is one queen, a few hundred drones and the remainder are the worker bees. Let’s meet all of them in detail.

The Queen Bee: Game of Thrones

As per our theory of biological intelligence, the queen bee is the most important member in a beehive, because she is the only fertile female in the hive. The queen bee mates with the males in the hive and by springtime, when nourishing honey is in abundance, it lays upto 2000 eggs per day. Like literally, it moves from cell to cell, laying one egg per cell depending on the size of the cell. The larger cells are for unfertilized eggs which give rise to bigger drone bees, while the smaller ones are for fertilized eggs which give rise to smaller worker bees. Surprisingly, since it is the worker bees that build the cells, they decide the ratio of worker bees to drone bees in the hive!

As fits the importance of her role, the queen bee lives the longest among all her family members. She has a full life span of four to five years. However, nature is harsh and her utility to the hive is only for two to three years, i.e., till the time she can lay a high number of quality eggs.

During this time when she is highly fertile, she secretes a substance called the queen substance which is passed from bee to bee in the food that they all share and eat. However, if the queen bee loses the capacity to lay eggs, or goes missing, the queen substance in the food decreases or completely vanishes. This is when the beehive members realize that they need a new queen bee. And so, they start a mechanism called requeening, wherein they nourish another egg exclusively with a special substance called royal jelly in order to nourish it to become a queen bee. This new queen bee can grow up to banish the older and weaker one from the hive, and in some cases, also destroys the other eggs which have the potential to challenge it.

Quite a game of thrones, eh?

The Drone Bee: It's a Woman's World!

If you feel sad for the queen bee, wait till you hear about the drone bees! Drone bees are male honey bees whose sole purpose in the hive is to mate with the queen. They are developed from unfertilized eggs, and thus are haploid, i.e. have half the number of chromosomes as the worker and queen bee.

They are usually reared four weeks before the mating season of the queen starts so that they are ready to mate when the time comes. Drone production declines as food reserves in the hive declines, and by late winter the drones are driven out of the beehives to save precious resources within the hive.

The presence of too many drones in the hive is thus seen to be an inefficient use of resources. In fact, the population of drones in hives is very high only when the hive has been left queenless. The resultant lack of queen substance in the hive’s food causes the normally infertile worker bees to develop abnormal ovaries. These worker bees now lay eggs to develop only drones.

This phenomenon is a sign of the end of the beehive. And the overpopulation of drones is the beehive’s last hope of genetic perpetuation. The last hope that one of their drones would mate with a queen bee from another healthy hive and pass on their genes.

The Worker Bee: The Busy Bee!

If you have heard the term ‘busy bee’, know that it is the worker bee that is being referred to. Workers bees have a short life span of about four to five weeks. In fact, science theorizes that it is the intensity of work and in later stages of life, the danger it involves, that leads to the short lifespans of the worker bees.

The worker bee lives upto its name from the beginning of its life and performs a range of tasks assigned to it as per its age. The whole process is reminiscent of life in the corporate. You start off as the apprentice, then the associate, then the manager, then the middle manager, then the most dangerous jobs of them all, the CEO. That is, if you aren’t dead of boredom and politics by then!

Here is the sequence of work done by the worker bee:

Just like the apprentice all of us once were, worker bees apprentice by doing the grunt work of cleaning. The beehive is one of the most sterile natural environment, and this is all because of the worker bees. They ensure each cell is clean before they store honey in it. They remove all debris of diseased and dead larvae from the hive. And they also seal off unwanted substances in the hive with the antibiotic-containing propolis.

Remember each of the 2000 eggs the queen bee laid per day? Well, these eggs hatch within three days to form larvae. And believe it or not, each larva eats around 1,300 times a day! So the worker bees make innumerable trips each day to feed each larva royal jelly. After a few days, the larvae are then weaned off the royal jelly and are then fed bee bread, a mixture of honey and pollen. The only exception to this diet regimen is the queen bees egg, which is fed royal jelly throughout its life.

Much like Jaya Bacchan in the iconic Kabhi Khushi Kabhi Gham scene, the worker bee waits from the elder forager worker bees at the entrance of the beehive. In this role, it becomes a processor bee it processes the nectar. For processing, it collects nectar from the forager bee in its crop and then regurgitates it into a cell in the hive. During regurgitation, it adds an enzyme called invertase to honey, which ripens it. Essentially ripening of the honey is the conversion of the sucrose of the nectar into glucose and fructose through the action of invertase.

Where one has to feed, one also has to cook. So in addition to taking care of the monstrously hungry larvae, the worker bees also fan the nectar deposited by it in the hexagonal beehive cells. The worker bee fans the nectar with its wings and causes the water content of the nectar to evaporate. This converts the nectar containing 70% water to honey containing 17% water. The low water content ensures microbial-resistance of the honey.

At this age, worker bees’ glands start producing waxy flakes on their underbellies. They use this wax to build new combs as well as to seal the combs containing honey in them. This helps in the further preservation of honey.

Also, the thousands of larvae that they fed some time back are now ready to become pupae. For that process to happen, worker bees need to seal their cells with a porous capping of beeswax. In the ensuing silence, the larvae spin a cocoon and become pupae. And once the pupae become adult bees, they chew their way out of this wax capping to join their family.

At this age, the worker bees develop their sting and guard the entrance of the hive as well as their queen against intruders.

The forager bees collect the nectar into their crop but do not digest it. They then go back to the hive and regurgitate this nectar into the crop of the processor worker bee before going back on foraging duty.

It is a lot of hard work. A single worker bee is only able to make 1/10 of teaspoon honey over its lifetime. And many times, they die in the process of foraging in harsh outer environments.

As I said, honey is a way of life. Next time you taste a spoonful of honey, I hope you remember this miraculously brilliant way of life inside one of nature’s biggest wonder- the beehive. India is full of unique desserts and Gohana jalebi surely is one that takes the cake! Find out more about this interesting dessert from Haryana. 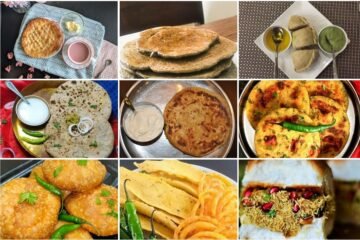 Traditional Indian Breakfast #1| How Does India Start Its Day? The small town of Uttar Pradesh has a sweet surprise for us! Learn more about the nostalgic experience that are Sandila ke laddu.