The name red-whiskered bulbul reminded me of two lines I had read in a museum ages ago:

(The bulbul has no complaints from the gardener, or the bird-catcher.

It knows that it is destiny to get caged, even if it is springtime.)

In the last days of his captivity, the last Mughal emperor Bahadur Shah Zafar wrote a beautiful poem about destiny. And in that poem, he also talked about the bulbul— an otherwise jocular songbird which was earlier kept as a pet in India because of its fearless nature and beautiful songs. As CW Smith reported,

‘These birds are in great request among the natives, being of a fearless disposition, and easily reclaimed. They are taught to sit on the hand, and numbers may thus be seen in any Indian bazaar.’

But enough with the literature. Let’s look at the basics of the red-whiskered bulbul.

The red-whiskered bulbul, or crested bulbul (Pycnonotus jocosus) is a passerine bird. Passerine birds are perching birds whose feet have developed through evolution to have three front-facing toes, and one back-facing one. This arrangement makes the feet perfect for tightly grasping thin tree branches and perching upon them.

Red Cheeks and a Funky Hairstyle

The red-whiskered bulbul is about 7.9 inches in length. Its upper body is brown and lower body is whitish. The tail is a brown continuation of its upper body, with white tips at the end. However, the vent area (as a child I called it the ‘bum’ 😉 ) is a bright red.

As a kid, the red-whiskered bulbul always looked a little comical to me. Just like its red butt-cheek, the face cheek is also red (just kidding!). The red face patch, tall pointed black crest (‘the fundoo hairstyle!’) and a thin black moustache-like line is characteristic of this bird.

The Secrets of the Gut

If you look at the beak of the red bulbul bird, it is characteristic of those of frugivores. The red-whiskered bulbul diet actually consists of both fruits and insects. Mostly, the young birds are fed with caterpillars and insects, and they maintain a more frugivorous life as they grow up.

Like the Pale-billed Flowerpecker, the bulbul is also highly evolved so that the seeds voided by it after eating the fruit germinate better. This is because the gut has evolved to process the food faster and relatively gently, hence damaging the seed very little.

Due to this evolutionary trait, the red-whiskered bulbul has inadvertently led to an uncontrolled spread of many invasive species in places like Réunion Island.

The red-whiskered bulbul lifespan is around 10-11 years long.

A Creature of Community

The bulbul is a highly gregarious, or social bird. When it breeds (December to May in South India, and March to October in North India), they roost in a community as big as a hundred or more birds. Together, they defend territories of about 32000 square feet from predators like crows. The areas preferred by them are open lands with bushes, light trees, etc.

Their nests are cup-shaped and built at medium levels on bushes, small trees, etc. In it are usually two or three light purple red whiskered bulbul eggs containing hatchlings who would hatch within 12 days. Both the parents take care of the young ones and are equal partners in the red-whiskered bulbul breeding process.

Due to their large roosts, the red-whiskered bulbul call are also varied and highly specific. At the community level, they have different alarm/warning songs to warn of predators, the tone and pitch of which changes with the level of danger. They also have roosting calls and greeting calls to maintain social contact between pairs. The baby birds have begging calls, to let the parents know of their condition and beg for food. They also make distress calls to let the parents know they are in distress. Listen to their beautiful calls in this wonderful video by PuneMate.

In yesteryears, the red-whiskered bulbul was often caged alone and kept in isolation as a pet. Now that we know more about it, I am sure you will realize what a travesty that is for a creature whose very existence has been designed to live in large flocks. Let’s hope this practice stops soon, and the bulbul’s destiny of loneliness remains limited to Bahadur Shah Zafar’s poem. 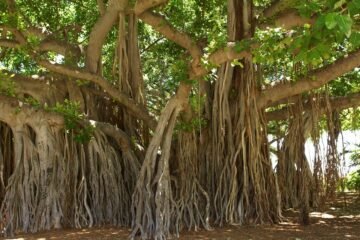 The Banyan Tree | A World Of Its Own

The canopy of the banyan tree is a spectacular sight indeed. Read on to find out why the banyan is even more amazing than it looks.

Sal Tree | From Enlightenment to Economy

Most of us in India, without realising it, have seen the Sal tree. But did you know how vital the tree of Sal is to both religion and economy? Pale-Billed Flowerpecker | The Magic of Evolution

Pale-billed flowerpecker may be a simple-looking bird, but shares a unique evolutionary relationship its host flora. Read more here.