Rogan painting is a 400-years-old artform from Kutch, Gujarat which is a unique form of contactless painting. As we were talking about in the previous article on Rogan Art, the contactless painting technique is made possible due to a unique Rogan paint, the composition of which is a secret known only to the traditional Rogan artist. If you haven’t already, take a look at the artform below.

Despite its uniqueness, in the 1980s, modernization and competition from cheap industrial goods started threatening the existence of Rogan painting. Dwindling demand made it more difficult day by day for the families involved in Rogan art to make ends meet. Let’s find out how the artform managed to survive the trials of time.

This article is based on the interview of one such Rogan artist, Mr. Abdul Gafur Khatri. I was fortunate enough to meet him on one cold January morning in an art fair in Delhi. Abdulji was an extremely friendly man, with a broad smile and mischievous twinkling eyes. There was a certain latent, lively energy in the way he got up to greet me. And when it came to talking about Rogan art, the love for it was evident in every word he spoke. The man must have been asked about the artform a hundred times already, but the eagerness with which he introduced an ordinary stranger like myself to his world of Rogan remained surprisingly undiminished, and extremely heartwarming.

Going by his very affable and approachable demeanor, it was impossible to believe that this man is a Padma Sri and National Award winner who has been the master of his craft for 40+ years. He is single-handedly responsible for saving and changing the course of the 400 year long history of traditional Rogan Art. This is because he was visionary enough to realise that everything in life needs to adapt to changing times in order to survive for long.

Let’s read his story below.

So as we were saying, in the 1980s, dwindling demand made it more difficult day by day for the families involved in Rogan art to make ends meet. And in 1983, Abdul Gafur Khatri, a fifth-generation Rogan artisan of his family, left his ancestral village in Nirona, Kutch to find a job in modern textiles. However, that was not meant to be.

A drought struck the Kutch region around this time, and choked the local economy of the region. The already dwindling Rogan art suffered another blow as the stream of tourists in the region declined. Due to the crash of the local economy, even casual labour jobs were unavailable. Almost every Rogan artist switched to other trades and professions. Soon, it was the Khatri family which found itself to be the sole custodians of this artform, holding on to its secret process of making the Rogan paint, as well as the skills of making the paintings.

The government came to the rescue, and a small project was awarded to the Khatris. And so, Abdul Gafur Khtari was soon called back to work on the project.

Rogan Painting: Adapting To The Times

As I said before, Abdulji was not only a gifted artisan, but also a visionary. He realised that Rogan painting in the present form was not going to work out in the modern world. After numerous discussions with sector experts, he realised that the artform and its products had to adapt to the changing tastes of the market. And hence, he started giving the Rogan paintings a more refined touch. The motifs of the paintings became more refined, and the patterns more intricate. New designs, like the Tree of Life, were introduced in Rogan paintings. They also started experimenting with different Rogan art products apart from traditional paintings and clothes.

The artform gained a further boost as Rogan painting caught the eye of India’s topmost political leaders. Soon, a trend of art-tourism started in Kutch, Gujarat, and the Khatri family found a steady flow of eager tourists awaiting to see them making Rogan paintings everyday. In peak season, the number of artisans range from 250-300 per day! This huge advent of art-tourism not only helps in spreading awareness about Rogan art, but also in supporting it financially as a number of tourists also buy some of the Rogan paintings.

From Sustenance to Stabilisation

Once the demand for Rogan art stabilised, it was time for another change in the history of the 400 year old artform. Abdulji realised that an artform is truly alive only when there are many artisans to make it. And for Rogan in those times, these artisans were less than ten in number.

To make this right, he started approaching external organisations for training. And that is when he came across an uncomfortable realisation. People were a little too quick to judge the family for the fact that only men practiced this artform. Although he understands this perspective, Abdulji clarifies that this wasn’t due to any gender bias. It was just that making Rogan paintings took a lot of effort and time, and in return the economic returns were low. The artisans had reached a stage where they faced extreme financial problems. Thus, to balance things out, the women of the family practiced other artforms like leheriya— which were easier, quicker to produce, and sold more easily than Rogan.

But to make up for the past, Abdulji now trains around 60 girls from his village Nirona. He targets to train at least 100 women in the art of Rogan in the near future. When I asked how it felt to train women for a change in his traditional artform, there was a mischievous twinkle in his eyes as he said, “Actually girls are easier to train. They have much more patience than modern boys do!”

The Sweet Fruit of Hardwork

And this is the story of a single family’s quest towards reviving their ancestral artform. Today ten members of the Khatri family spread across three generations are keeping the ancient artform alive. Between them, they have one Padma Shri award, four National Awards, three National Merit certificates, one International Craft Award and seven State Awards. And with the number of new artisans they are training every day, this number is bound to grow.

Today, Rogan painting is still endangered. However, with the help of the Khatri family, it has gained awe-inspiring popularity. In 2020, Rogan painting was even covered in the Amazon Storyboxes concept, and I was pleasantly surprised to see Amazon cartons arranged brilliantly to create the portrait of Abdulji at Delhi Airport.

And so, this is the story of Abdul Gafur Khatri, a visionary Rogan artist who changed the course of an centuries-old artform and strengthened it through adaptability with modern times. An artisan, who has given a lasting life lesson to all endangered artforms of India, and indeed, for everyone of us. And that lesson is that if you want to survive for the longer run, learn to adapt to changing times. 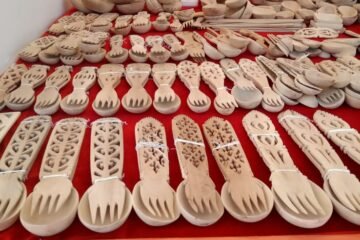